Solar energy is considered to be emitting no

, the true solution to the desire to build a carbon free energy supply. This directs the focus of attenation to the “active” life of PV production, which appears to produce “free” energy, free of cost and free of

This focus changes when you actually plan to install photovoltaic supply for e.g. a private home. This requires quite a lot of costly components, costly not only in terms of price, but also in terms of energy:

In particular the solar panels and Li-Ion batteries require a lot of energy and other resources. Being required in large quantity due to the low energy density and volatility of sunlight, for a complete calculation of energy budget and carbon footprint the costs of production must be taken into account.

Most assumptions for the calculations appear to be fair and realistic. Two of them I want to look at more closely:

Taking the real Energy output from Germany, based on the official statistics from the Fraunhofer Institute, the total produced volatile energy 2020 from

, which is an average real energy output of

module. The assumptions in the paper explicitely state that they are valid for southern Europe, so there is no intentional bias, but the numbers are just not valid for e.g. Germany and other central European countries.

The life time assumption is also very optimistic. Taking into account that there may be damage to the modules due to thunderstorms, hail storms, or defects in the solar cells, it is more reasonable to assume a life time which is identical to the guaranteed product life time, which is typically 25 years.

Most PV modules are produced in China, so regarding the

emissions, the base number for the carbon footprint is

Taking into account the real solar energy delivery, and the more realistic, insurance validated life expectancy of 25 years, the real PV carbon footprint for Central Europe, represented by the statistics of Germany, is

Due to the volatile character of solar energy the actual power generation is not yet the end of the story, when the goal is an energy production without fossil fuels. The first type of volatility is the day/night cycle and short term weather variations. This type of volatility can be covered with a 1-7 day battery storage. A reasonably safe value is a storage equivalent to 3.5 day energy consumption, which covers appr. 7 days, assuming half the consumption is during the – solar active – day time. With this scenario chances are good to cover nearly the whole time range from march to October. This is more capacity than is typically bought currently in Germany, but the political enouragement of storage is just beginning. In the US there are more fully autonomous “island” installations, which usually have even larger battery stores.
Therefore as a rule of thumb the battery capacity is assumed to have 1% of the yearly expected energy yield to cover most requirements except the 3-4 winter months. This is documented by practical experiences. For each installed module with 1

the required capacity C is

The carbon footprint for Li-Ion batteries is appr. 75 kg per kWh Storage capacity – it is assumed that it is the same for EVs as for power wall usage, and the guaranteed life time is 10 years, although there are — not guaranteed — claims of 20 year lifetime. In order to estimate conservatively, we assume 10 years of lifetime, considering the fact that the battery capacity cannot be used 100% . Extending the life time of a battery typically means to reduce the active capacity by 30-50%. The calculations can be adapted for 15 or 20 years, when new generations of batteries will be available. Therefore the storage carbon footprint per installed module is distributed on the total energy production of 10 years:

Therefore a feasible standard installation for private homes, essentially the electric energy supply for 8 months from march to october implies a total carbon footprint of

Long term storage – through the winter

There are several ways to estimate the carbon footprint effect of seasonal volatility, i.e. that in winter there is hardly any usable solar insolation whereas in summer there is a peak. Assuming that the yearly total solar energy generation corresponds to the yearly total consumption, it is obvious that the seasonal volatility, which leads to the deficit in winter, means a surplus during the summer months.

Following the analysis of Prof. Hans-Werner Sinn, the main storage problem is not the short term storage, but the long term storage. Solving the problem with solar energy alone along the lines discussed above, we have to add at least 3 additional months of storage, as there is hardly any solar energy between mid november to mid february – this is dependent on latitude, the statement is made for appr. 50 degrees (Germany). There is unanimous consent that this longterm storage not possible by means of Li-Ion batteries, neither from a price perspective nor from a carbon footprint perspective.

The currently favoured approach to long term storage is the so-called Power-to-Gas concept: The surplus electrical energy in the summer is converted to Hydrogen by electrolysis. Due to the fact that hydrogen is difficult to store and handle, it is further processed to methane (the calculations for the currently discussed alternatives ammonia or methanol are similar). This is identical to natural gas and can be easily stored (e.g. in liquid form as LNG) and reconverted to electricity with a gas power plant. This can be done at the scale of the community, city, county, or state, where both the electrolyser and the gas power plants are run.
The problem of this concept is that the effective storage efficiency is only 25%. In order to get 1 kWh in a winter month you have to invest 4 kWh during the rest of the year. 1 kWh of average yearly consumptions costs

of volatile input solar energy. This increases the total carbon footprint to

This is nearly half of the carbon footprint of a traditional gas power station, and cannot be neglected.

If we consider only the winter months, the solar P2G process has 4 times the carbon footprint, so

, see also here ) . Accordingly, it is irrelevant for the

If it is possible to store hydrogen directly without extremely high pressure or extreme cold, then the efficiency of storage can be increased to 50%, resulting in a

footprint of at least 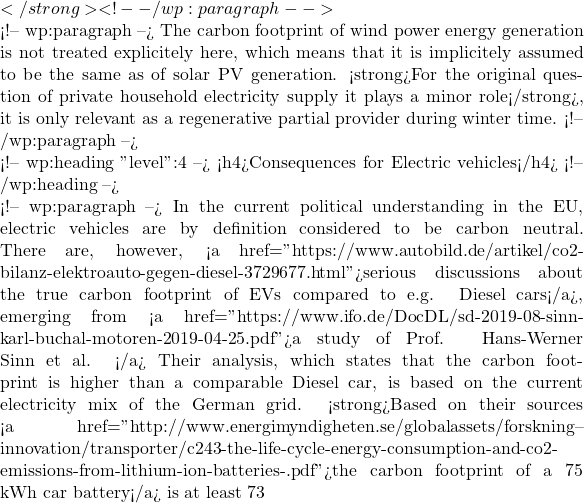 CO_2$-colonialism, shifting the emissions to China or other “cheap countries” by means of the production of the necessary components.

A trap for fools

This site uses Akismet to reduce spam. Learn how your comment data is processed.